I choose music for the service based on the liturgical year. Occasionally I program music by African-American composers, since I believe they are important American citizens because of their contributions, past and present. A good source of organ music is the four-volume African-American Music Anthology, published by Morning Star Press, edited by Mickey Thomas Terry (much of which is in the classical style), who is a concert organist and former professor at Georgetown University. Another excellent organ book is "Five Spirituals for Organ," settings by Calvin Taylor, whom I met at the national AGO convention in Nashville in 2012. "This Little Light of Mine" was especially moving when I played it for a congregation last year. For more on African-American music, go to page 3 of this website, "About My Performances" and look under "Organist Shortage."

Here are the latest churches to tell about, Oct. 30th, 2014:  This month I arranged to go to the Franciscan Monastery to practice the organ for 1 ½ hours.  As it says on the website, www.myfranciscan.org, under “architecture,” “The floor plan of the church is the five-fold Crusader Cross of Jerusalem, and it is built in the Byzantine style . . . with some modified Romanesque influences . . .” It is a beautiful old church with statues, mosaics and vast echoing spaces where the organ sounds glorious! It is located in Washington, DC not far from Catholic University.  Father Jim was nice enough to arrange my practicing time on the organ there.  Father Greg met me that day.  He was friendly and told me the history of the Catholic cathedral in Jerusalem which contains relics of Jesus Christ.  The 3-manual pipe organ is French in design. There was a tour going on while I was there, so I couldn’t play loudly until they rounded the corner.  When I was done, I sat with some tourists and watched a movie about the Franciscan Monastery.  When I left I was walking on Cloud 9!

Enjoy the sounds of spring!

August 20, 2016:  Due to circumstances caused by the health problems of a close family member, I haven't had the time to update my website.  I hope to begin updating it soon.  Meanwhile, I have continued to play organ and/or conduct the choir at church services. 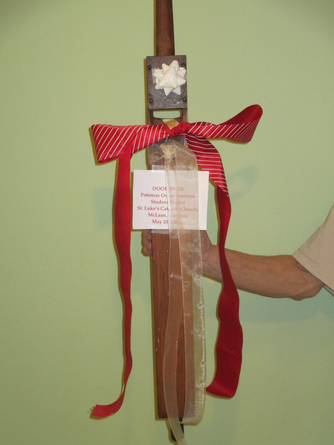 This is a photo of an organ pipe, a wooden flute, which I donated as the door prize for the Potomac Organ Institute Student Recital
​in May 2013 at St. Luke's Catholic Church, McLean, Virginia. The winner of the organ pipe (which my husband got from his organ
teacher ​in Pennsylvania in the 1960's) was Claudia! To learn more about organ lessons through the Potomac Organ Institute,
​visit www.potomacorganinst.org

I was born in Washington, DC and grew up in the Bethesda, Maryland suburbs near where we lived for 30 years.  In 2013 we moved 14 miles N.E. of Bethesda.  I began piano lessons with Hildegarde Seeboth at age 7. I loved music from the beginning and knew from an early age music would be important in my life. Everything about piano and music lessons came naturally to me. My family had always attended church, so it seemed natural that I begin organ lessons at age 20. 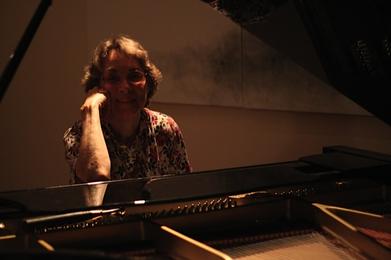 UPCOMING OR PAST DATES

2020:  Because of the worldwide corona virus, nearly all churches in Maryland, DC and Northern Virginia have cancelled their services indefinitely, starting in early March.  Many have gone to online services (Zoom), for which they don’t use substitute organists. I had a job March 15th at St. Thomas Apostle, Woodley Park, DC where Jay Parrotta is the organist/director, but by then all the churches started to cancel their Sunday services.  They paid me anyway:  I had gone there that Saturday to practice and spent time since I was learning all the chants and music.

2017:  May 28th, (Memorial Day weekend, so the Postlude was “Postlude on “America the Beautiful” by John S. Dixon (he’s British but lives in Hampton Roads, Virginia)) I played at St. Stephen’s Lutheran in Silver Spring, Maryland.  They have a 3-manual Rodgers.

On 3 Sundays, June 18th, July 16th, and August 20th, I played at Our Savior Episcopal Church (Church of Our Savior) in Silver Spring, Maryland.  The organ is a 2-manual Casavant with no antiphonal division, but it is prepared for one.  Bruce Cole is the organist-director there.  It’s a wonderful church with a large, mostly African-American congregation (many from Africa and some of the Caribbean islands such as Dominica, Trinidad, Dominican Republic, and Jamaica.)  The congregation’s hymn singing is beautiful and joyous!  It is exciting to accompany them. As a coincidence, I used to practice at this church (they had the same organ then) when I was first married and lived with my husband in Calverton.  I hadn’t been back there since 1979!  As they say, “what goes around comes around!”

I played at St. Peter’s Episcopal Church in Arlington, Virginia on August 27th .  Jim Selway is organist/pianist there.  Their organ is a 3-manual Lewis and Hitchcock.

November 5th, 2017:  Played the 10:30 service at (Episcopal) Chapel of All Saints at Goodwin House, Falls Church, Virginia at a retirement community.  They have a 3-manual Allen organ.

On December 31st I played the 9:00 and 10:30 services at Church of the Holy Comforter, Vienna, Virginia where David Kelly is the organist/director,  and I directed the children’s and adult choir.  They have a 4-manual digital Walker organ.

TWO CHURCHES WHERE I HAVE OFTEN PLAYED AS A SUB: Was frequently organist/director at Church of the Pilgrims, which has a 3-manual 1970 Skinner, in Washington, DC. From 2005-2015.  St. Dunstan's Episcopal Church in Bethesda, Maryland (2 manual Wicks) is my family's church where I sometimes subbed from 1996-2015.  I also sing alto in the choir there once every 3 weeks, with 1 rehearsal on Sunday morning and at the  Sunday service.  Michael Austin was Organist/Music Director until after December 25, 2018.  Then Joey Arkfeld became the new Organist/Music and currently is on July 3, 2020.